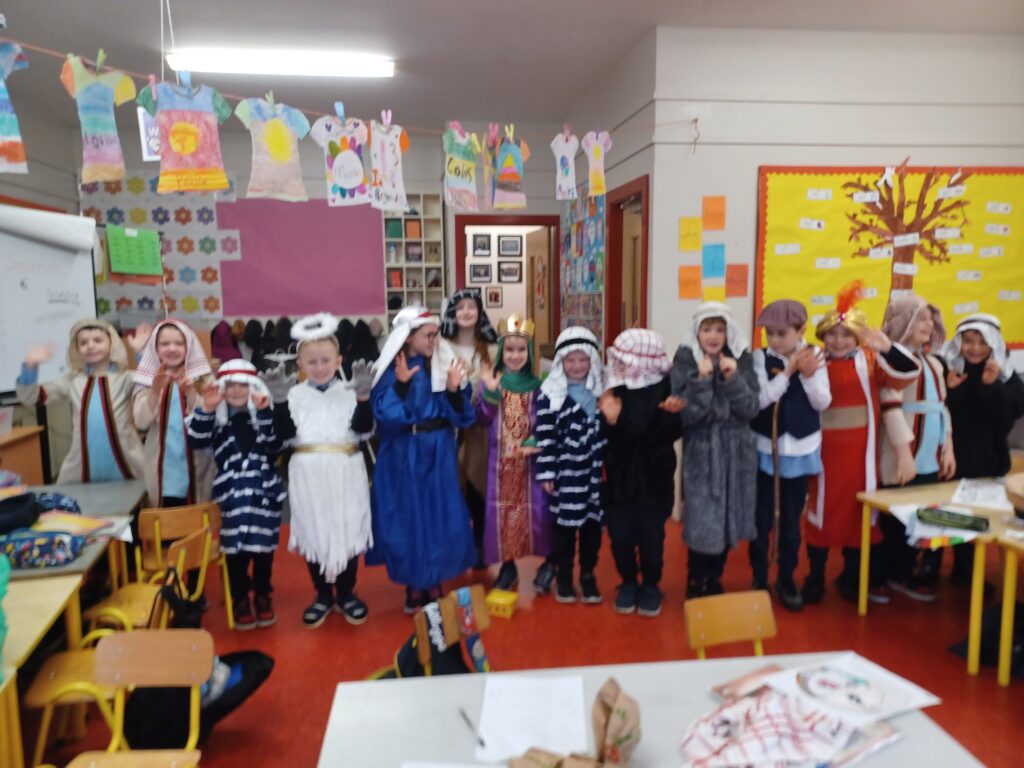 Scripts, roles, rehearsals and costumes have been centre stage in classrooms over the last two weeks.  Children practiced lines, rehearsed songs and showcased their talents in preparation for the Christmas plays.  From excitement to nervousness and everything in between children from Junior Infants to Sixth Class got set to take on the stage.

Numerous life skills and benefits are developed through the performing arts.  The sense of achievement and confidence boost is fantastic as valuable lessons are learned: hard work pays off, every individual on the team counts, teamwork works, responsibility, commitment and dependability counts, if at first you don’t succeed – try again until you do, nerves can be overcome and you learn to think on your feet.

Ms McAnearney’s Junior and Senior Infants set the ball rolling with a lovely production of “Santa’s Hat” followed by a melody of song.  This was followed by Mrs Meeneghan’s First and Second Class who staged the nativity “Following the Star”, they filled up the stage with great colour, costumes and creativity.  Ms Brogan’s Third and Fourth Class put on a spellbinding dráma “An Garbhán” with fluency and panache.  More classic fare was whipped up by Mrs Lynott’s Fifth Class who enacted “The Ghost of the Tree” a tale humorously scripted by Billy Varley which was flowing with linguistic flair. Mr Brennan’s Sixth Class play “Alas in Blunderland” was full of snippets from children’s classics with lots of energy, excitement and enjoyment in evidence.  Thank you to Róisín Kilgannon from Music Generation for all of her enthusiasm and efforts.  Mrs Mulhern, Martin Walsh and Colette Egan were invaluable members of the crew performing a myriad of roles tying the whole school effort together.

Thank you to Sinéad Jones for coordinating and linking in with the school to create Christmas Baubles for Kilglass Village, to Pamela Tuffy and Enniscrone Men’s Shed for creating the baubles for us and to Mrs Lynott and Ms Brogan for all their work on the project.  They added a lovely splash of Christmas cheer.  Thank you to Caroline Gilroy too for the lovely Christmas tree and decorations gifted to the school.

A big thank you is extended to Brendan Henry for building the stage.  To Bríd Hannon and the Parent Association and to our generous sponsors for the fantastic Christmas Draw and most especially to all the families and friends who supported the plays in both attendance and spirit – Míle Buíochas!